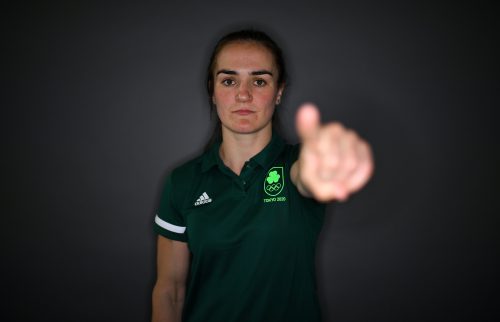 22 June 2021; Lightweight Kellie Harrington during a Tokyo 2020 Team Ireland Announcement for Boxing in the Sport Ireland Institute at the Sports Ireland Campus in Dublin. Photo by Brendan Moran/Sportsfile *** NO REPRODUCTION FEE ***

Kellie Harrington wrote her way into the history books in Tokyo this morning, as she overcame Beatriz Ferreira of Brazil in stunning fashion by unanimous decision, 5-0, in the Women’s Light final (57-60kg).

Harrington came into the bout having never met the Brazilian before, and Ferreira had proven herself as a force to be reckoned with in Tokyo, defeating all who came before her in style. In the opening round, she just had the edge on Harrington, taking the judges scoring 3-2, but Harrington came out in force to win rounds two and three clear, and to go on to be crowned Olympic champion by unanimous decision and secure Ireland’s fourth medal of the Tokyo 2020 Summer Olympic Games.

“Relieved, totally relieved. I’m just glad that it’s over!” Harrington said afterwards. “To have the support of a nation backing you is just, it’s actually hard to believe, I actually feel the nation has been behind me. Regardless of whatever happened out there today – whether I got a silver or a gold – I knew, and I know, that I have made them proud.

“I knew it was 3-2 after the first round,” she reflected. “I just went back out and kept control and just did what I could do because if I had gone out and tried to put the pressure on and rushing, then that’s her game. I just stuck to my plan. Her game is the counter, because she’s strong.  She’s small and she’s really, really good at what she does, so I just stuck to my game and stuck to what John and Zaur had planned, and it worked. I don’t even know the score in the second round, and the third. It was good but I’m glad it’s over.”

Looking back on her pre-fight prep she added: “You are nervous for every single fight, it doesn’t matter what fight it is. But nerves are great, they make you feel alive. They give you energy, they keep you on edge. As long as I can control them and not let them eat me up then I’m fine. I kind of do my own bit of sports psychology, I know how to control them now. I’m not afraid of failure, I’m not afraid of losing. So I suppose once you’re not afraid of that, then anything is possible.

“The amount of lovely messages that I have got just saying I’m inspiring the young kids coming up and the way I carry myself that I’ve made the country proud – that’s my goal,” she continued. “To be able to inspire the next generation coming up. To be able to carry myself well so that kids coming up can carry their selves well – this is what it’s all about.

Holding the Olympic gold medal, she added: “I don’t know what it means, to be honest. It hasn’t sunk in yet, I’ve just won a fight, like one fight. Each fight is one fight. I’m at a fight, I’m at a tournament. This won’t sink in until I get home, until I see me family and to be honest with you, coming out here, I knew I was going to be away for six weeks and I had said to John; “after three weeks, if I want to go home can I go home? I don’t know how I’m going to be able to perform if I’m homesick,” and John was just like “Kellie, relax. You won’t be homesick,” And I wasn’t homesick! The team has been fantastic. The boxing team has rallied around me and we’ve rallied around each other.

“Brendan Irvine has been a leader out and out. My roommates, the whole team has been fantastic and a great unit and I genuinely couldn’t have asked for a better team to be here with. We all push each in so many different ways and it’s just been fantastic. I’m glad to be here and I’m glad to have them here on this journey with me.”