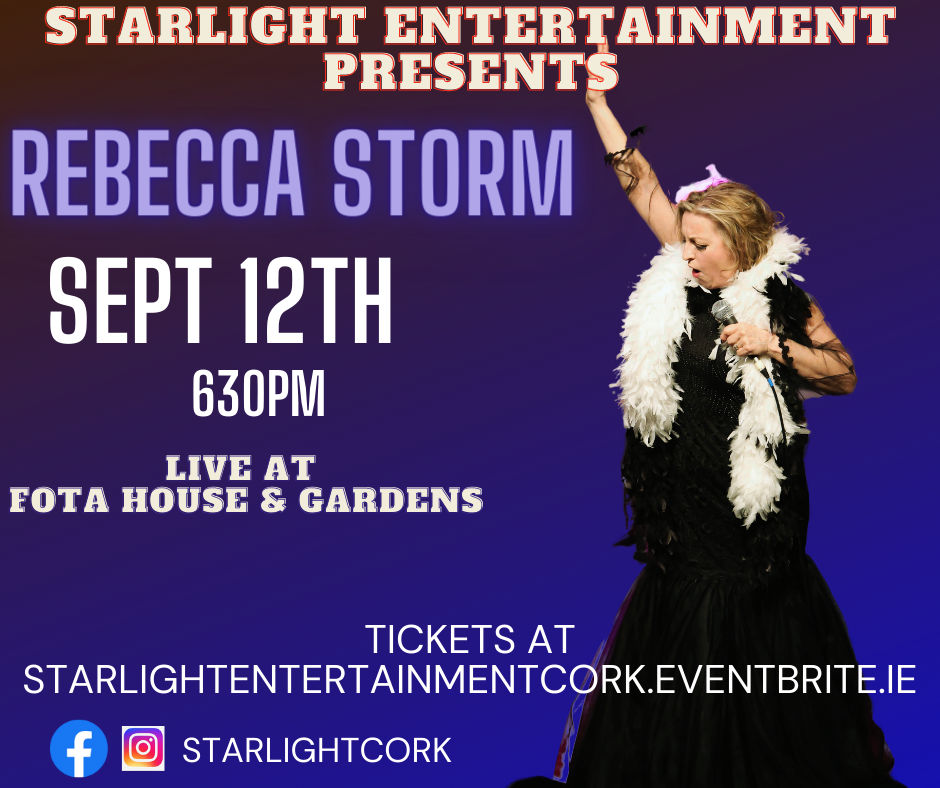 Starlight Entertainment are delighted to announce Rebecca Storm will perform a full concert at the Lee Music Festival in 2021 to outdoor audiences.

Over the past 40 years Rebecca has established herself as one of the most popular Leading Ladies in Musical Theatre, playing demanding roles in Evita, Les Miserables, Chess, Aspects Of Love, Piaf, Annie, Hello Dolly . . .

At 23 she auditioned for her first Musical Blood Brothers and although a little young to play Mrs. Johnstone – Liverpudlian Catholic mother of seven children – author Willy Russell was so captivated by her voice he insisted Wardrobe & Make Up went to work to ‘age’ the young actress. Her portrayal of Mrs. Johnstone has become so popular that she still returns to the role after 34 years.

In 1992 Rebecca devised, co-directed and starred in Hollywood Ladies – a tribute to her many influences from the Silver Screen – among them Barbra Streisand, Judy Garland, Julie Andrews and Gracie Fields. Together with her company of fourteen singers & dancers she was awarded Best Musical Review ’92.

She was very proud to be invited to sing for the King of Norway at his Coronation in 1991, performed several times for the British Royal Family and more recently for Irelands’ President Michael D. Higggins.

Her recording career began in 1985 with a Top Twenty single Putting On The Show, which she performed on Top of the Pops. Rebecca has been presented with awards for her albums Ovation, Broadway By Storm & Ireland nstonewere released by Sony Music and her latest album The Essential Rebecca Storm is a double CD consisting of a live recording of her sell out concert at Dublins’ Grand Canal (Bord Gáis Energy) Theatre and a studio album produced by her husband and Musical Director Kenny Shearer.

With numerous concerts, radio & TV appearances around the world, Rebecca enjoys a busy and varied career and after many years in London’s West End theatre world, Rebecca has now made Ireland her home and is more than thrilled with the honour of having her handprints set on the famous ‘Gaiety Theatre Walk Of Fame’.

Rebecca was delighted to return to her Yorkshire roots to play Chris in the musical ‘Calendar Girls’, written by Gary Barlow & Tim Firth, playing to over 200,000 people in the UK & Ireland.

In 2020 Rebecca celebrates a thirty six year association with the iconic role of Mrs. Johnstone in Blood Brothers – a role that will always be close to her heart.

Please note that this event is an outdoors, socially distanced event, and is a picnic styled event. Feel free to bring your own blankets, chairs, and we will have food vendors on site too!