Aidan Walsh secures at least a bronze in Tokyo 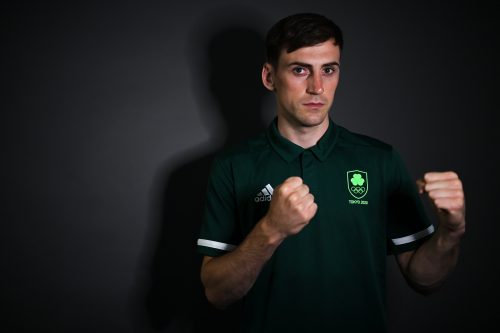 22 June 2021; Welterweight Aidan Walsh during a Tokyo 2020 Team Ireland Announcement for Boxing in the Sport Ireland Institute at the Sports Ireland Campus in Dublin. Photo by Brendan Moran/Sportsfile

Team Ireland boxer Aidan Walsh has guaranteed himself at least a bronze medal at the Tokyo 2020 Olympic Games this morning, following a 4-1 split decision win over Merven Clair (MRI) in an absorbing Men’s Welter quarter-final.

With sister, Michaela, cheering him on from the stands, Walsh powered through the opening round, and came back strong in the third after Clair pushed him all the way in the second round, to take the win.

“It’s incredible. I’m just so glad I’ve done my family, my girlfriend, my coaches and. Team Ireland so proud. To have your name up there as an Olympic medallist… I want to go for gold – always aiming for higher and better. It’s gone now and I’m on to the next one – I’m looking forward to the next one.”

Speaking of his sister’s support from the stands, he added: “Her voice cuts through the noise! You’d hear her everywhere in Belfast! It’s the same when we’re sparring in Dublin the coaches have to shush her. Ah it’s great, me and her are best friends. I would actually cut the medal in half and give her half of it, that’s how much she means. I’m disappointed for her that she didn’t come out here and create history together, that would have meant a lot to me but it’s just boxing, and we’ll come again for the next Olympics and try and create more history.

“I’m just so grateful. Everything is a bonus, but I just have so much in life and everything is just a bonus. I don’t know what I’ve done to deserve all of this – it’s crazy. I’m lucky. Very, very lucky.”

Walsh now faces into an Olympic semi-final where he will meet a familiar foe in number one seed, Pat McCormack, of Great Britain.

Earlier on in the day, Kellie Harrington made her Olympic debut in dominant fashion, as she overcame Rebecca Nicoli of Italy by unanimous decision to advance to the quarter final stages of the Women’s Light.

Looking back on today’s fight, she added: “She’s a tricky southpaw. The tactics were to try and be first, to try and draw her out so she’ll throw and then I can counter and that’s what we did, we had to stick to it, but patience was key.

Reflecting on the wait before her opening fight: “It has been a bit of a wait. I’ve been a bit anxious, but it’s been great to support the rest of the team. As long as we’re started that’s the main thing, and I’m started now, this is going to fly in now. Once you get boxing you don’t feel it, it’ll just go, go, go and I’ll be home before I know it sitting at home, eating coffee slices and drinking tea with my two dogs and Mandy. If it’s not with a medal, it’s not the end of the world. We’ll cross that bridge when we come to it.”