Cork-based Actor & Artist, Sebastian Thommen, is giving chefs and budding entrepreneurs the chance to win a food business of their own for €12, by listing his food trailer, Toast Pantry & Coffee Bar, on raffle platform, Raffall. 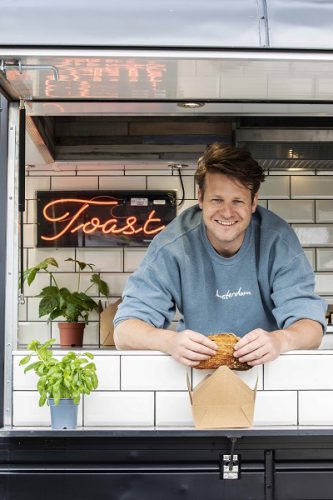 Sebastian launched ‘Toast’ in May 2020 and often traded in the city’s Ballinlough Park.

Toast sold gourmet grilled cheese toasties and coffee, however Sebatian has made the decision to list his entire business due to the popularity of his other passion, watercolour art commissions, in recent months.

Having studied Theatre Performance in Cork in 2004, Sebastian is well known for starring as Michael Collins in RTE’s five-part TV drama, ‘Rebellion’, which aired in 2016.

In purchasing a €12 ticket for the prize draw, entrants will be in with a chance of winning Toast’s professionally restored 1960’s Rice horsebox trailer.

Powered by super quiet generators worth €3,000 and comes fully equipped with a coffee machine (valued at €6k) and a fully HACCP approved kitchen.

“Running ‘Toast’ has been such a positive experience for me. I’ve made many new friends and it has boosted my art career to the extent that I’m thankfully now able to pursue that full-time. It’s time to pass the torch on to someone else and hopefully help them achieve their dreams and ambitions. By Raffling the food trailer it’s exciting to know that someone who may not have been able to afford it under normal circumstances is now able to.”

Sebastian has made 5,000 tickets available for the raffle.

In the event that the target of 5,000 tickets isn’t met, those individuals that have entered will be in with a chance of winning a cash prize equivalent to the ticket sales that have been generated by the closing date of Friday 30th September 2022 and the food truck will remain under Sebastian’s ownership.

Sebastian hopes to remake the majority of the money he has invested while also giving someone who may not have the start-up capital required to purchase their own food trailer the opportunity to flourish and build a business of their own.

5% of the total monies generated will be donated to Sebastian’s chosen charity, Pieta.