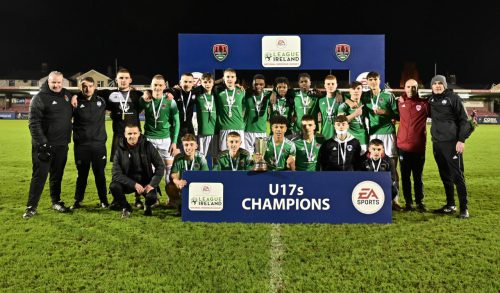 The EA SPORTS National League of Ireland U-17 Mark Farren Cup will remain on Leeside as Cork City defeated Galway United 2-1 in the final at Turner’s Cross on Wednesday night.Second-half goals from Republic of Ireland underage internationals Franco Umeh and Liam Murray, along with a sensational man of the match display from goalkeeper Aaron Mannix, helped City land the silverware at the expense of a spirited Galway side, who grabbed what proved to be a consolation in injury time through their own Liam Murray.With the help of a huge home crowd of 1,201, City started the game on the front foot but neither Umeh nor Éanna Fitzgerald could hit the target with their strikes from good positions.Umeh had a couple of penalty appeals waved away as the half progressed and he missed a glorious chance to give his side the lead before the interval but he was denied by a superb last-ditch block from the excellent Galway centre-back Alex Murphy.United were arguably the better side for the majority of this showpiece occasion but a combination of wasteful finishing and some incredible goalkeeping from Aaron Mannix proved to be decisive.Striker David Tarmey blasted straight at the City number one when he was sent clear on goal by Ronan Bambara after half an hour but the young shot-stopper’s best saves came in the second 45.He reacted well to turn Murphy’s close-range volley wide his bottom left corner shortly after the restart moments before he somehow clawed Mark O’Halloran’s header wide of his bottom right corner.And with 20 minutes remaining, City took the lead against the run of play with Umeh tapping in from a couple of yards out after good work in the lead-up from Fitzgerald and Liam Murray.Mannix soon produced two more amazing stops to thwart Tarmey’s powerful header and Mikey McCullagh’s volley which allowed Murray to make it 2-0 after 84 minutes when the midfielder expertly stroked the ball into the far bottom left corner from a tight angle.Mannix would be beaten in injury time when Galway substitute Liam Murray planted his header into the roof of the net at the Shed End but it proved to be too little too late as City hung on to win the cup.CORK CITY: Aaron Mannix, John O’Donovan, Donnchad O’Doherty, Charlie O’Brien, Leon Ayinde, Éanna Fitzgerald (Kennedy Amechi 75), Zach Dunne, Josh Fitzpatrick (Cathal Heffernan 61), Liam Murray, Franco Umeh (Arran Healy 81), Ciaran Hodanu.GALWAY UNITED: Kieran McDonagh, Churchill Idemudia (Liam Murray 84), Ronan Ariguzo (Patrick Baranyai 73), Ryan Nolan, Mark O’Halloran, Steven Healy (James Lukau 84), David Tarmey, Adam O’Halloran, Mikey McCullagh, Alex Murphy, Ronan Bambara.Referee: Lucas Keating.