The funding is a part of a scheme set up to support performers and bring live events to communities right across the County of Cork. 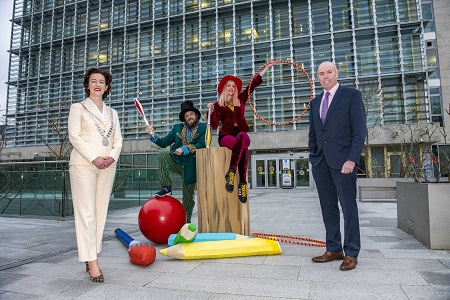 The Mayor of the County of Cork, Cllr. Gillian Coughlan and Cork County Council Chief Executive Tim Lucey attended the launch along with performers Haj and Lidija from the Circus Factory Cork.
Pic: Brian Lougheed

The Council hopes to host another series of live outdoor events between April and June this year, as part of the Local Live Performance Programming Scheme.

They are calling on musicians, bands, ensembles and groups who wish to perform, as well as promoters, producers, venues and festival organisations to get involved with production and promotion.

The Creative County Cork Grants Scheme is open to not-for-profit groups, organisations or collectives and is funded by Creative Ireland.

It is aimed at developing and delivering innovative projects, events and initiatives to help stimulate and enable creativity in every community.

The third scheme Cruinniú na nÓg, is a national day to celebrate and encourage participation in creative activities by children and young people.

This year, Cruinniú na nÓg will take place on Saturday, June 11th. Cork County Council is looking for projects that will allow young people to be inquisitive, inventive, try a new creative skill or showcase a special creative talent.

Mayor of the County of Cork, Cllr. Gillian Coughlan praised the funding saying:

“I hope that musicians, artists, performers and community groups in County Cork will make full use of the funding that is available. There is huge scope for imagination and creativity. The last two years have been extremely challenging for the live performance industry, but we also saw huge resilience. It was wonderful to see so many outdoor performances on beaches, parks and town centres last summer and I hope that can be replicated and expanded upon in the near future.”

“The Local Live Performance Programming Scheme provided support to over 650 professional performing artists, event producers and ancillary production personnel in County Cork last year. It also helped deliver more than 180 events that animated our towns, villages and rural locations, reaching an audience of at least 15,000 people. We want to support collaboration between artists, festivals, community groups, arts and heritage organisations as well as local businesses. The three grant schemes will help us to achieve this as we all work together to make County Cork as vibrant as possible.”

Applications are now open for all three schemes.