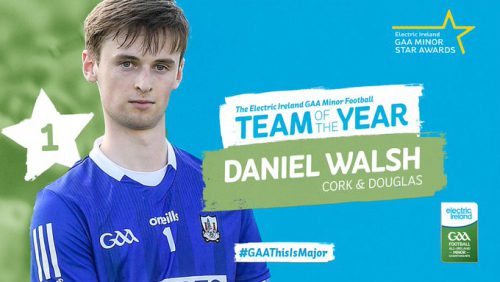 Cork Goalkeeper Daniel Walsh has been named on the 2021 Electric Ireland minor football team of the year.

All Ireland champions Meath have 8 representatives, Tyrone 5, while Cork and Sligo have one each, while Meath defender Conor Ennis was named footballer of the year.

“The level of talent on display during this year’s Minor Football Championship has been incredible and I have no doubt many of these young men will go on to have a significant impact on their counties for many years to come. It has been a privilege to watch them perform to such a high level during the 2021 season.

“A special thanks also goes to the parents of all Minor players and also the coaches who have moulded and mentored these young men into the people they are today.

“I would also like to congratulate the Moynalty/Carnaross Minor panel who went above and beyond for their local community by raising life changing funds for Jigsaw. They epitomise what the Minor Championships is about and they are a credit to our great games.”

JP Ferreira to leave Munster at the end of the season