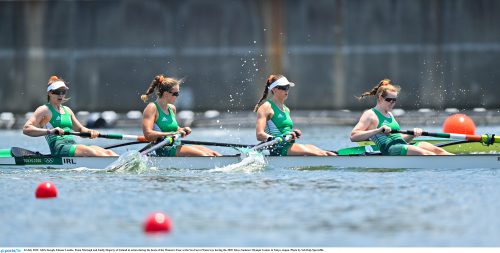 24 July 2021; Aifric Keogh, Eimear Lambe, Fiona Murtagh and Emily Hegarty of Ireland in action during the heats of the Women’s Four at the Sea Forest Waterway during the 2020 Tokyo Summer Olympic Games in Tokyo, Japan. Photo by Seb Daly/Sportsfile

Ireland has its first medal of the Tokyo Olympics.

The women’s four of Cork’s Emily Hegarty, along with Aifric Keogh, Eimear Lambe and Fiona Murtagh took home the bronze medal overnight, producing an incredible comeback in the last 500 metres to pip Great Britain to third.

They’ve also made history by becoming the first Irish female rowers to win an Olympics medal.

The World and European champions set a world best time in winning their semi-final to lay down a marker for the medal race.