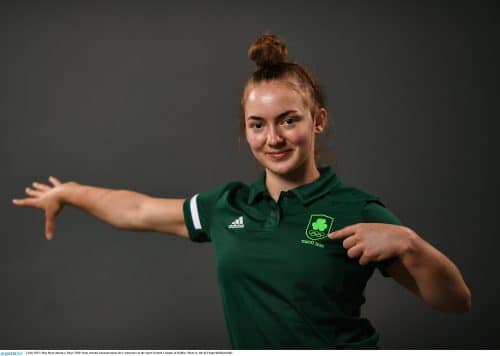 2 July 2021; Meg Ryan during a Tokyo 2020 Team Ireland Announcement for Gymnastics at the Sport Ireland Campus in Dublin. Photo by David Fitzgerald/Sportsfile

Cork’s Meg Ryan says she’s  happy with her performance as she became an Olympian yesterday.

The Douglas Gymnastics club gymnast completed her women’s qualification in the All-Around yesterday with an overall score of 47.199

“To officially be an Olympian is just amazing, it’s surreal. It’s been an amazing experience overall, just looking around and taking it all in.

“I knew that no matter what happens I was just going to try and enjoy it and be happy with the fact that this is the Olympics and I am an Olympian!”

The senior Irish gymnast, who delivered Ireland’s first World Cup podium finish at the 2019 World Challenge Cup in Turkey winning silver on Uneven Bars, admitted that there were some nerves in her first routine.

“Definitely a bit of nerves for me at the start, I think the beam is always a shaky one to start on anyway. In my own head, a silly mistake was made and it’s something that wouldn’t normally happen.

“I know these things happen on the day and especially when you’re nervous. I was a bit nervous and shaky.

“I got into it though, and after that I tried to put it behind me and focus on the rest and I think I did a good job with that and I was happy with the rest of the performance,” she concluded.