Cork’s Sanita Puspure is safely through to the quarter finals of the women’s single sculls at the Olympic Games in Tokyo. 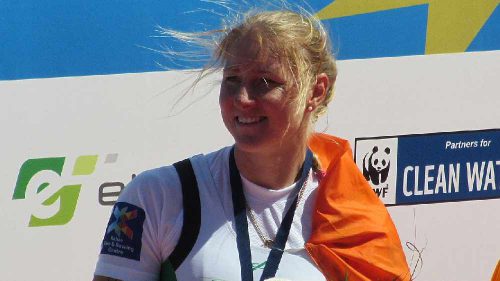 The double European and World Champion star was dominant in her heat this morning, winning in a time of 7.46.08, finishing 8 seconds clear of Mexico in second place.

Speaking after her race, Puspure was relieved to get her Tokyo 2020 Olympic campaign underway.

“That’s the first race done, I’m focusing on the next one now and taking it one race at a time. I’m not thinking too far ahead, and am staying calm and collected.

“The conditions were okay, it swings around a lot. For our race, we had a cross head, and you can see by the flags here it is a tailwind so it changes rapidly. You just have to go with it.”

Cork’s Ronan Byrne and Philip Doyle will have to go to the repechage tonight, the 2019 world silver medalists were fourth in their heat in the men’s double sculls.

Cork’s Paul O’Donovan and Fintan McCarthy go in the heats of the lightweight men’s double sculls tonight at about 3.20 Irish time.

Aoife Casey and Margaret Cremen go in the Women’s lightweight double sculls before that, with the women’s four of Aifric Keoghe, Eimear Lambe, Emily Hegarty and Fiona Muragh also in action, along with Monkia Dukarska and Aileen Cronin in the women’s pair.

The opening ceremony for the Games takes place at midday Irish time.

Organisers say it will be a “solemn” event, with the lighting of the torch taking place in front of an empty stadium due to COVID-19 restrictions.

Boxers Kellie Harrington and Brendan Irvine will be the Team Ireland flag bearers.