Dermot Kennedy today has announced two brand new Irish shows at Dublin’s 3Arena on December 13th and 14th with all profits from the concerts going to the Pieta and Focus Ireland charities.

The two upcoming December shows will see all profits split between two charitable causes close to Dermot’s heart; with Pieta providing a free, therapeutic approach to people who are in suicidal distress and those who engage in self-harm and Focus Ireland who provide services for people who are homeless and people at risk of homelessness in Ireland.

Tickets for these special shows will go on sale this Friday November 19th at 9am from Ticketmaster. 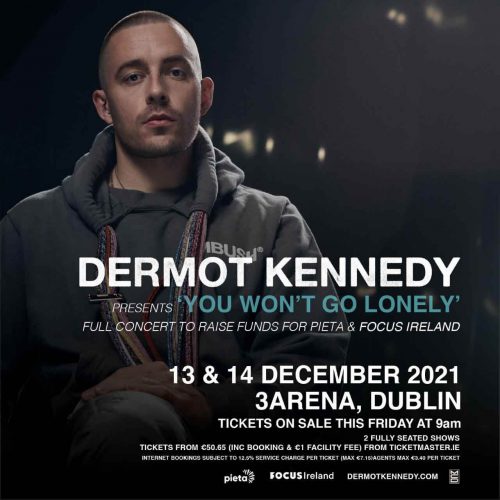 On confirming the shows, Dermot said; “I’m so grateful to be playing two shows in Dublin this December in aid of Pieta and Focus Ireland, two incredible charities. Suicide and homelessness are two issues that are sadly so prevalent in Ireland today. There are so many people that badly need our help, especially at this time of year. Please think of them and let’s come together and raise as much money as we can for these extremely important causes.“

Reaching nearly three billion streams globally and seeing over 15 million monthly listeners on Spotify alone, Dermot has become an irrefutable global star since the release of his number 1 selling debut album ‘Without Fear’ in 2019. Alongside getting nominated for the Best International Male BRIT Award in 2020, he has become the biggest selling Irish artist of the millenium, with his debut album sitting at the #1 spot for a total of 29 weeks and selling over 1.7m copies worldwide and becoming Ireland’s fastest selling debut album of the past 20 years.