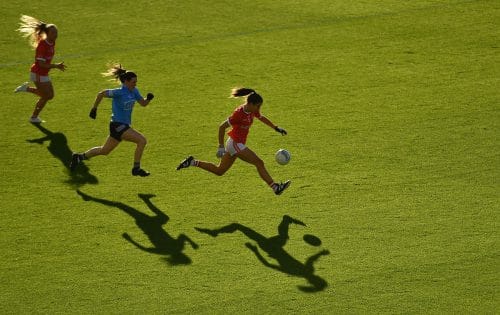 Erika O’Shea of Cork races clear of Lyndsey Davey of Dublin during the Lidl Ladies National Football League Division 1B Round 1 match between Cork and Dublin at Páirc Ui Chaoimh in Cork. Photo by Eóin Noonan/Sportsfile

Erika O’Shea’s move to Australia has been officially confirmed.

The All Star Cork defender has signed for AFLW side North Melbourne Tasmanian Kangaroos.

The 19 year old will be joined by footballer of the year, Vikki Wall of Meath.

Speaking to RedFM sport recently, O’Shea said she took inspiration from some of her sporting heroes in making her decision.

“It’s something I want to do, and push myself to the limit. I’ve looked up to all these amazing athletes, like Sonia O’Sullivan and Katie Taylor, and they all had to leave Ireland to become one of the best at their sport, and they knew that and did that and they obviously succeeded.

“It’s just something that I feel like had to be done if I wanted to excel that little bit further, and it’s something I really want to do.”

AFLW talent and performance manager Rhys Harwood said “we’ve been really impressed with the traits and impact Erika has shown with Cork. Her speed, agility and ability to cover the ground stand out, as well as her capacity to find a balance between defending and attacking in Gaelic and we think her attributes will give her scope to play through a variety of positions for us..

“At just 19 years of age, Erika has plenty of upside and is a player who we feel can grow with us over a period of time. She can’t wait to arrive in Melbourne and begin her journey.

“Erika’s work ethic and drive to get the best out of herself will serve her well as she transitions across to AFLW. To have achieved an All-Star team selection at her age is particularly impressive, and speaks to her level of talent.

“We are delighted to have both Vikki and Erika come into our program, and we can’t wait to work with them over the coming seasons.”

Erika spoke to Ger McCarthy on the Women in Sport Podcast recently – you can listen to their chat here.

Listen to “The Women In Sport Podcast S03E19” on Spreaker.