“Are you going shopping or?” 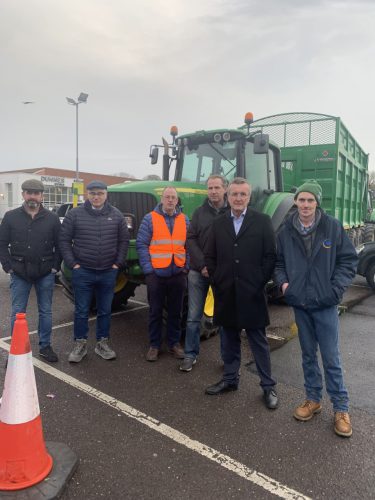 When asked by RedFM News how he felt about the abuse the protestors were getting from customers, Chairman of the IFA National Poultry Committee, Nigel Sweetnam said:

“I’d much rather be at home minding my chickens and looking after my farm, but we’ve come to the stage here, we’ve been looking to meet with Dunnes since before Christmas, our costs have gone through the roof. I’m looking for a future for my three sons who are at home farming with me. We would just, all we want is engagement from Dunnes Stores. That’s the key here.”

The IFA say pig, poultry and horticulture farmers are experiencing severe difficulties with rising costs in relation to feed, energy and fertiliser and they are seeking their produce be sold for a higher price due to the rising cost of production.

Tim Cullinan, President of the IFA, told RedFM News that they would rather be working their farms today but have no choice but to raise the serious issues facing their members:

“We are not stopping the workers from Dunnes Stores going into their jobs this morning. Do you know, we don’t want to be impacting on people’s livelihoods. But I would look I would say to the general public, do you know, we would like support around this issue now. And just think about shopping in Dunnes Stores at the moment, because if every other retailer has agreed to engage with their suppliers, they’re willing to at least engage. No engagement from a reliable resource, it’s just not good enough.”

Another cold snap is on the way