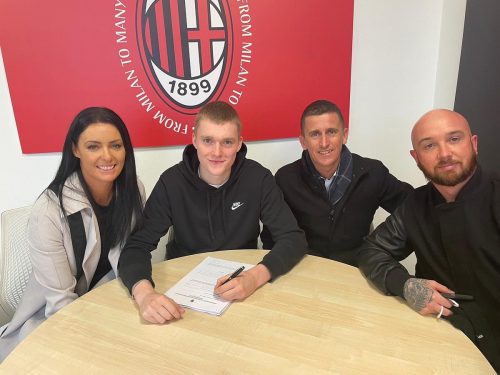 It was confirmed this week that the Cork City defender had signed on loan with the Italian giants until the end of the season.

The Republic of Ireland under 17 captain had signed professional forms with City last summer, and made his 1st team debut on the final day of the season against Galway United.

The 16 year old departed for Milan this morning, and before getting on the plane told RedFM Sport he still can’t quite believe the move is happening.

“I’m going to be honest with you, I’d say it’s only going to actually  properly hit me when I’m in Milan!

“I’m just so happy, and my family is so happy. In the last day or two it’s really started to sink in.

“I think once I start there and find my feet, I’m going to improve so much. And that’s my goal – to keep getting better and better.

“It’s a dream to sign for such a big club like that, and be able to play alongside top players in Europe – it’s a dream for any young footballer really.

“The move came about through my agent Stephen [Ireland], who put in a tremendous amount of work.

“[Playing with Cork City] was great for me, 16 years of age and training with men, and to get my debut last season was very good for me. It put me in the right direction, and now I’m here!”

We’ll hear from Cathal and his dad Rob on the Big Red Bench this weekend.

Colin Healy – We need to be better against Galway United

Draw made for football qualifiers