Fans of It’s Always Sunny in Philadelphia don’t have long to wait for the next instalment of episodes!

The record breaking fifteenth season of the sitcom will premiere on FXX on December 1st and will be available to stream on FX+ and Hulu the next day. 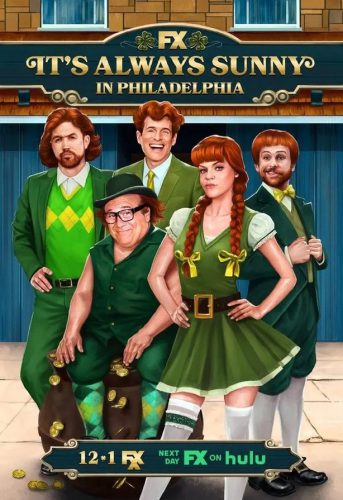 The gang were delayed in filming season 15 because of the pandemic but it’s finally on the way and in Ireland we’ll have an even bigger interest to see what the cast were filming when they were in Ireland earlier this year.

The cast of Rob McElhenney, Glenn Howerton, Charlie Day, Danny DeVito and Kaitlin Olsen shared photos of them shooting scenes in Ireland for the new episodes during the summer.

The official synopsis for season 15 reads, “This is a season that sees The Gang try to exploit pandemic aid, sidestep cancel culture, evade criminal justice, reflect on their origins, and reconcile their identities and homeland roots.”

It’s Always Sunny in Philadelphia first aired in 2005 and follows the lives and escapades of those running Paddy’s Pub in South Philadelphia.

Tagged as Entertainment It's Always Sunny In Philadelphia TV