Westlife were at the Aviva Stadium this morning for the announcement of a show at the Dublin stadium.

The group will take to the stage at the venue on Friday July 8th 2022 to kick off their “Wild Dreams” tour.

Tickets for this brand new show will go on sale Friday 5th November 2021 at 8am from Ticketmaster.

The Wild Dreams Tour follows on from their record-breaking 2019 reunion tour which saw Shane, Nicky, Mark and Kian play to over 600,000 fans across 27 countries. This 2022 tour will include their two sold out nights at Cork’s Pairc ui Chaoimh as well as taking on a sold out show at Wembley Stadium in London. 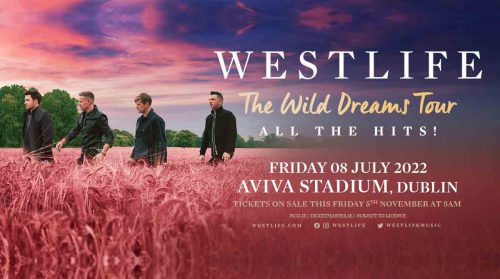 Speaking on the announcement, Westlife said, “We are incredibly excited to announce news of The Wild Dreams Tour and to finally get back performing to all of our fans at the UK’s and Ireland’s biggest venues.”

“After the last 18 months, this tour means more to us than any that we’ve ever done before. It will be a massive celebration and will bring us closer to our fans than ever before. We’re planning some spectacular shows which will include all of our greatest hits and some special surprises.”

News of the tour comes after the group recently released their latest single “Starlight”, the first track off their upcoming “Wild Dreams” album.