Kenny not worried about his position following Serbia draw 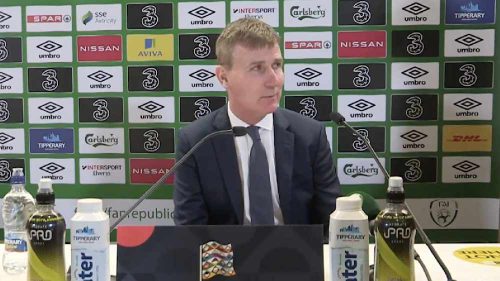 Republic of Ireland boss Stephen Kenny says he’s not concerned about media speculation about his future.

The Boys in green are still searching for a first win under the former Dundalk manager, however they turned in an excellent performance against Group A table toppers Serbia last night at the Aviva Stadium, earning a point in a 1-1 draw.

Kenny had come under pressure from the media following the disappointing draw with Azerbaijan on Saturday, however speaking after last night’s game Kenny says he’s not concerned about that, and has no concerns about his future as manager.

‘I have clear communication with key people in the FAI, and they’ve been nothing but supportive.

“It’s irrelevant if you want to write something on the back of a newspaper or whatever, I can’t get sidelined by that, I need to remain focussed on the job at hand.

“People have seen over the last week that there’s some really talented players coming through.”

Kenny paid tribute to the Irish supporters afterwards, saying that they created a superb atmosphere throughout the game.

“It was our third game in six days, it was a tough shift for the players. They showed great spirit, they fed off the energy from the crowd, the crowd were amazing.

“Gavin Bazunu kept us in it, they have a lot of quality do Serbia, and Gavin kept us in the game.

“Yeah we got a break, which we haven’t had too many of, we were delighted to get it.

“Matt Doherty played 90 minutes three time in 6 days, he hasn’t been a regular in the Tottenham team, he was absolutely exhausted but he still pushed himself to the limits, got to the end line to make that cross, and tremendous credit to him.”

Ireland were missing a number of players last night, and Kenny says having a fully fit squad from which to choose will make them stronger.

“You can see a lot of the players have shown a lot of composure. We need to add some extra quality in the final third, we’re very much a work in progress.

“We have some good attacking wingers to come who weren’t here, Callum O’Dowda and Jason Knight and Chiedoze Ogbene – he’s absolute lightning, absolutely rapid he is.

“The fact that Callum Robinson wasn’t fit enough to start, he made things happen in both games, it was great to have him so quickly after having Covid, and these players will make us better.”

Kenny though was keen to pay tribute to his players after a tough run of three games in six days.

“The support was magnificent tonight, it was like a full house. The players got energy from that. The likes of Egan, Shane Duffy, Matt Doherty, it was their third 90 minutes against the likes of Serbia and Portugal which were really intense games.

“It was a real real shift, and they deserve a lot of credit for their attitude, it was first class.

“We’re not in the business of celebrating a draw at home, but just in the context of the week I thought we deserved four points from the other games if not six, we didn’t just see that last minute out in Portugal, so to only have one coming into the Serbia game was a real kick in the teeth.

“The players showed a resilience for the quick turnaround, and the three competitive games in six days which is a new concept.

“They showed their determination and resilience to hang in there and to realise they’d got a few kicks in the teeth, and to get the break at the end which they deserved – they’ve been in short supply.

“It was a good feeling in the stadium, it was great to see people celebrate the goal in the stadium, even if it was an OG, just to have the level of passion around again. That’s been difficult through the pandemic for everyone, so everyone loved the idea of coming and supporting Ireland and were very proud in doing that, and we’re very proud to represent Ireland.”

Next up for the Boys in Green is a trip to Azerbaijan on October 9th.