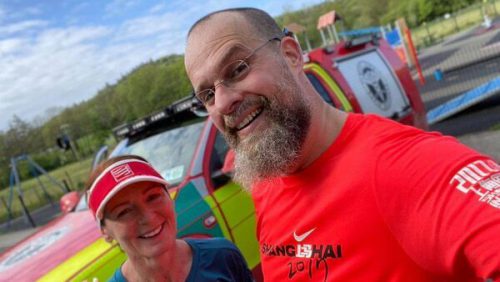 “To be able to do your own City marathon is fantastic and it was an amazing thing to be able to do. But to be able to do it on the anniversary, it would literally be six years to the day that I nearly died, and I’m doing it with the person, one of the people, that are responsible for keeping me alive. It’s absolutely fantastic”

A passerby found Olivia in the ditch and alerted the Emergency Services.

Emergency Consultant Dr Jason Van Der Velde was the first responder on the scene and had to put her on a ventilator on the side of the road in order to stabilise her before she was transferred to CUH.

Olivia went through a long rehab process to recover from her injuries and is now running the marathon with Dr Van Der Velde almost six years to the day that she almost lost her life and raising money for West Cork Rapid Response .

Speaking to RedFM News, Olivia has described the marathon as the race she was meant to run

“There were two things I was signed up to do the day of the accident – one was the Cork City marathon the next day. and the other one was a race in the Arctic.  And that’s what kept me motivated to train. I just wasn’t willing to give up on them. and so on Sunday, we have the Cork City Marathon coming up. so for me, this is kind of closure – this is the race I was meant to do.  And I fought long and hard to be able to do it. It’s a very special time for me now coming up, especially as I said, to run through the streets of Cork with the man who saved my life.”

Details of the GoFundMe campaign are available below