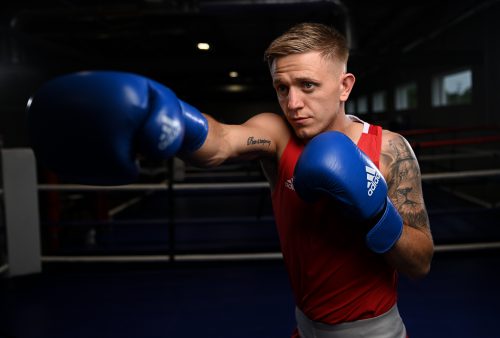 Ireland’s Kurt Walker was on hand to deliver the big upset of the morning in Tokyo as he defeated reigning World Champion and number one seed Mirazizbek Mirzakhalilov of Uzbekistan in his Men’s Featherweight Round of 16 by split decision to advance to the quarter finals.

An incredibly tough fight between the two saw Walker take the better of the opening round, as the pair tested each other on every turn, with Walker delivering some fantastic combos to put Mirzakhalilov on the back foot. The World Champion was not going down easy though and sprung back in a relentless second round, with Walker defending extremely well and landing some key blows to hold a slight edge going into the last. A superb third round display from Walker though saw him power through, upping his speed and intensity to tire out Mirzakhalilov, and pushing on to win the fight by a 4-1 split decision in the end.

Speaking afterwards, an ecstatic Walker said: “It’s indescribable. I just need to get my head level again and try and relax and recover, but I am buzzing! I just tried to keep him off – feinting, jabbing, body work. I knew I was fit so I knew I could definitely do it for two rounds anyway and get the two rounds up, which I did. I knew he was going to push on strong, so I am delighted.

“I knew he is relentless. I knew it was going to be a tough fight. I have a really big heart, I really do, and I knew I could dig deep. I have the best coaching staff in the world, 100 per cent. I was delighted to see how happy they were – it brings me on, I am buzzing!

“This will be hard topped. This is the highlight of my career so far. Biggest stage in the world – beating the champion of the world – a fairytale definitely!”