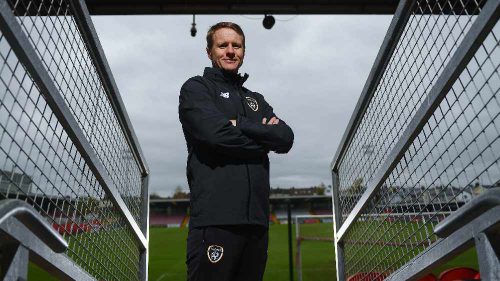 Republic of Ireland under 17 manager Colin O’Brien says he’s delighted his side have progressed to the elite phase of European Championship Qualifying as group winners.

The Boys in Green came from two goals down against Poland at Turner’s Cross yesterday to finish 2-2, Cork City’s Mark O’Mahony opening the scoring for Ireland for his third goal in as many games, with Shamrock Rovers midfielder Justin Ferizaj restoring parity with a terrific free kick in the second half.

That draw saw Ireland pip Poland to the top spot of the group. The elite phase of the qualifiers will take place early next year.

O’Brien told RedFM Sport after the game that his players deserve tremendous credit for their performance.

“There’s a lot of substance in this group. They were challenged today.

“Mark O’Mahony again pops up, and gets us back in the game. You settle the players down for the second half and I think we deservedly got an equaliser, a fantastic free kick from Justin.

“He’s come on [as a sub] and he’s made a difference to the game, and all week we’ve been looking at players who might not start that can come in.

“To come from two down in any game and to get something out of it is a great sign in a team, and it just shows that we have a bit of substance when we need it as well.”

A crowd of 925 was at the Cross for yesterday’s lunchtime kick off, and O’Brien said it made a huge difference.

“On behalf of all the players and staff we’d like to thank all the supporters.

“It definitely helped us again today when we were down, you could see when Mark got that goal they came to life which was great and it does help the players, and they do appreciate that.

“So again, thanks to everybody that came out.”