Mona McSharry became the first Irish swimmer in 25 years to compete at an Olympic final today, and put in a solid performance this morning in her 100m Breaststroke final, placing 8th overall in a time of 1:06.94.

Earlier in the day, a superb performance from Carolyn Hayes in the women’s triathlon saw her finish in 23rd position in a time of 2:02:10, while there was also good news from the boxers, with Aidan Walsh powering his way into the quarter-finals of the men’s Welterweight.

Annalise Murphy secured her first top 10 finish of the Games in race five of the Laser Radial series, while there was heartbreak for the Irish men’s Rugby Sevens squad meanwhile as despite taking their first ever Olympic win over Kenya this morning (12-7) it was not enough to see them through to the quarter final stages.

Aidan Walsh has qualified for the quarter finals of the Men’s Welterweight (63-69kg), following a unanimous win over Cameroon’s Albert Mengue Ayissi. The Belfast boxer used his height to his advantage, and boxed smart.

Speaking after the bout the determined fighter said; “It’s amazing to get the first one out of the way and focus on the next one. I just listened to the coaches’ advice and did what they were telling me. My strategy going into it was to keep it long, keep the basics and to do what the coaches said. They always have the best advice and you just have to put your trust in them and listen to the advice that’s given to you. But keep it simple, and what’s worked for me and got me here.”

While most athletes are being cheered on virtually by family, Walsh’s sister, Michaela, is also a member of the boxing team, competing yesterday in the Women’s Feather event so was on hand to cheer him on.

“To do it alongside my sister is even more amazing,” Aidan continued. “It’s incredible it’s just one of those ones you can’t even describe, because it’s surreal. Especially in boxing, like something you hear of brothers in the family, but brother and sister, obviously with the female boxing coming along so good it’s amazing. Obviously I’m disappointed for my sister, but now she’ll be rooting for me. We always root for each other – it doesn’t matter what tournament, win, lose or draw.”

It was onwards and upwards for Ireland’s Rugby Sevens squad today, as they faced off against Republic of Korea in the first of their 9-12 place placing games. Having failed to progress from the pool stages to the quarter-finals, Ireland put on a strong showing in today’s second game to win out in comprehensive fashion, 31-0.

Ireland started quickly with scores by Mark Roche and Jordon Conroy in the first five minutes to secure a 10-point advantage at half time. Republic of Korea started strong in the second half, but Ireland held them scoreless before adding three more tries, one more from Conroy and a double from Gavin Mullin.

“We said we would go out and attack them,” said first try scorer, Roche. “We wanted to hold on to the ball, and that’s what we did for the 10 points that we got and then we just switched off a little, we allowed them play instead of attacking them in defence. We know how to pick ourselves back up for another game and know how important it is to finish strong and get that 9th place.

“It was tough this morning, a tough one to take with that last minute try to put us out,” said Mullin of their bittersweet win over Kenya in their final pool game earlier. “It’s a good group here so we just managed to shake it off in the afternoon. We all just chilled out a bit, relaxed. We’re at the Olympics and we have to go out and enjoy ourselves. It was still pretty sloppy to be honest. We’re still not happy with where we are but we’ll come out tomorrow for our last game and just have a bit of craic.”

Ireland will face Kenya once more in the final game of their Olympic campaign tomorrow (July 28th) in a bid to finish in 9th place.

Sailors Robert Dickson and Sean Waddilove made their Olympic debut with a splash today, as they finished in first place in their opening 49er class race, edging out Great Britain and Germany. After a tricky start, with Race 1 being abandoned due to shifting winds, the race officials reset the course and the Irish sailed strongly to finish first. Racing is now cancelled for the rest of today and will resume tomorrow. There’s still a long way to go in this competition though, with 12 races in total in the series.

It was a good day for Annalise Murphy as well in her Laser Radials, as she secured two top 10 scores, with a 9th and 10th place in Races 5 and 6 respectively has moved her into 20th place. Today’s earlier Race 5 marked the half way point of the regatta. The Lasers now have a rest day (Wednesday) with racing to resume on Thursday with Races 7 and 8 in the ten race series. 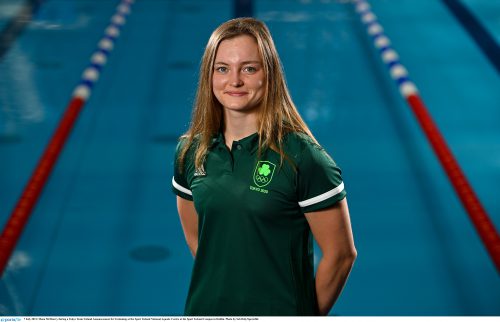 Sligo’s Mona McSharry made history today, becoming the first Irish swimmer in 25 years to compete in an Olympic final. Ranked 11th entering the heats on Sunday evening, McSharry qualified for the semi-final in 9th, before going one step further to reach the final in 8th place. A time of 1:06.94 in the final – slightly outside of her semi-final race of 1:06.59 –  saw her finish 8th overall.

Speaking afterwards, she said: “It’s amazing, thinking about it like that, that there hasn’t been anyone else who has done this in 25 years, I think it puts it into perspective. For me, racing in it is just another final – but it really is a lot more than that. It makes me feel so proud that I made it there.

“In the race it was hard to tell, I was really just trying to go for it. It definitely felt like a good race and anything sub 1:07 is a good race in my mind so I’m happy with the race. Of course it wasn’t a PB and was the slowest of the three rounds, but I think that comes as well from that there was a sense of relief in making it to the final so I was just excited to go out there and race and see what would happen. The worst  that could happen was that I come 8th at the Olympics and that’s what happened so that’s not a bad result for my first event.”

There was huge support from home with many setting their alarms to watch live. Including McSharry’s family at home in Grange, Co. Sligo.

“To see all the people who are even staying awake at 3am in the morning to watch me race, it kind of just shows that there is  huge support behind me and they really care and that’s amazing, I really do want to say thank you to everyone for that. It really does mean the world.”

A battling performance from Carolyn Hayes saw her claim 23rd place in the Women’s Individual Triathlon, in a race delayed by challenging weather conditions. Hayes posted a time of 2:02:10 with the run being the most impactful aspect of her race, posting the 10th fastest time in the field for the 10km segment.

A morning of heavy rainfall delayed the start time by 15 minutes, with the tail end of a typhoon sweeping through Odaiba Marine Park. Hayes exited the swim in 41st position, and the treacherous cycling conditions saw a number of athletes fall, but Hayes worked up to the front of her pack in time for the second transition – posting the fastest T2 in the field in 28th place. She gradually picked off another five spots during the run, and was just four seconds off the athlete in front of her after putting in an impressive sprint finish.

“I’m happy enough with the performance,” she said afterwards.
“I obviously came for a better result, but considering where I’ve come from and everything I’ve done over the last few years I have to be pleased with it. The Olympics –  I’ve always said – it’s the pinnacle of sport. I always hoped that I’d get here, and probably didn’t believe I would, so I think it’ll probably hit me later tonight that I’ve just competed in the Olympic Games.”

Action continues for Team Ireland today, with sailors Annalise Murphy and Robert Dickson and Sean Waddilove on the water today, while Darragh Greene, Daniel Wiffen and the relay team will all hit the pool this evening for their respective heats.