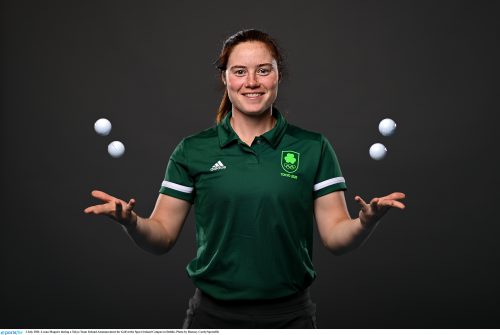 2 July 2021; Leona Maguire during a Tokyo Team Ireland Announcement for Golf at the Sport Ireland Campus in Dublin. Photo by Ramsey Cardy/Sportsfile

Leona Maguire posted an opening round of 71 to leave her on level par for the tournament on day one in Tokyo.

The Cavan native is five behind the leader, Mags Sagstrom of Sweden.

Stephanie meadow meanwhile carded a one over 72.

Opening with 3 pars, Maguire carded a bogey on the par 3 4th, but bounced back well with a birdie on the 5th. On her back 9, she posted two bogeys and two birdies, one of which came at the 17th when she held a 20-foot putt down the sloping green.

“It was mixed,” admitted Maguire of her round. “I probably didn’t give myself as many chances as I would have liked and didn’t quite have my irons dialled in, not that there was that many of them, it was mostly hybrids and woods into the greens but it was just slightly off I would say today. I holed a few nice putts to save pars and that. Just a little bit of fine tuning I think this afternoon and be ready to go again tomorrow.”

The conditions are a contributing factor, with temperatures rising to 34 degrees Celsius and real feel touching 38 degrees. However, Maguire has been preparing for the heat well in advance with her team.

“We’ve been doing hot baths and stuff for a few months now,” she explains. ”This was kind of a continuation of a few events in the heat but this is the hottest we’ve had this year. I use slushy drinks and ice, it’s whole combination of things before, during and after your round. After is going to be the key to recovery with the quick turnarounds.”

Maguire represented Team Ireland in Rio and admits that she likes to think that she has matured a little bit since then.

“Yeah I mean, it’s hard to tell really how different I am since then,” she laughed. “I’d like to think that I’ve matured a little bit and have a lot more experience under my belt. I didn’t get off to the best of starts in Rio, so I was a little bit more patient today. I got a few bad breaks and tried to stay as patient as I could and stay strong. I could have let it get away from me today and I didn’t, so I’m happy with how I managed that.

“I enjoy wearing green, it’s an honour for me to represent Ireland, I do it every week but this is a special one this week.”

Maguire is set to begin her second round tomorrow at 01.47am (Irish time), however organisers are considering some inclement weather due for this weekend in the Tokyo area, so two rounds may be completed tomorrow.