Cork’s Stephen Ireland says he believes he can still play football at a high level – but he’s happy making the move into coaching.

The Cobh native hasn’t played the game since leaving Bolton at the end of 2018, after a career that saw him play for Manchester City, Aston Villa and Stoke City.

At 35 years of age Ireland still feels like he could play at a high level – but told RedFM Sport that he has no regrets and is happy with coaching.

“You know, I’ve finished football now, haven’t officially finished football, I do believe I still can play and I probably should be playing, but I’m not going to get back in at the level I want to be at, or I’d accept. And that’s fine.

“In the meantime I’ve been doing a lot of coaching and mentoring, and helping young talents. Cathal [Heffernan] is one of them, and there’s many more I’m just trying to help.

“I’m just trying to give back and help and still be involved in football, but on my terms.

“I don’t want to be attached to a club, I want to stay in the game but on my terms.

“This is my new chapter, trying to help, nurture and develop young talent, and hopefully it could be a defining factor in them being top players.

“It’s very rewarding, I’m seeing some great results with some of the lads. Cathal has come on leaps and bounds, he’s absolutely flying.

“I’ve got some lads in England, two or three of the lads in most of the academies here now, from United, Stoke, City, Everton, Liverpool, Burnley.

“I’m working with some very talented boys, I’m just trying to give back from everything I’ve been through, good and bad.

“You know I’ve had a long journey, sometimes there’s been a lot of drama! [laughs]

“But they’re all lessons to be learned. But my knowledge and what I’ve been through, and my experiences, I want to give back. 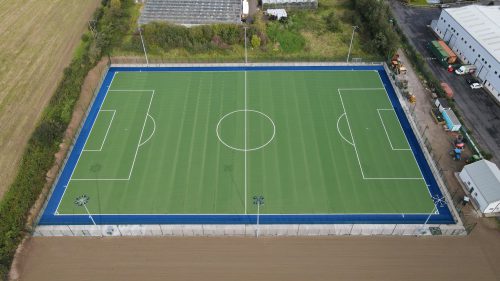 Ireland has been heavily involved with the Cobh 4 Football campaign which has seen a top of the range astro turf pitch built at Old Church Park with the cooperation of all the clubs in Cobh.

Such is the level of Ireland’s involvement that the pitch has been named “The Stephen Ireland Astro’, and he says he’s incredibly proud of it.

“It’s looking really good, and it’s probably long overdue to have something like that there.

“Everyone is excited about it and there’s a great buzz about it, hopefully it will help all the kids develop as well of course.

“Cork and Cobh have produced a lot of great talents, and Cobh in particular hasn’t had much of a facility to harness all that.

You can listen to that interview in full on the Big Red Bench Podcast.