Swedish House Mafia have reunited and have announced a 44 date tour including a show in Ireland!

The trio will perform in Dublin’s 3Arena on the 6th October 2022. Tickets are priced at €82 and will go on sale on Friday 29th October at 10am from ticketmaster.ie.

Swedish House Mafia has teamed up with global superstar The Weeknd for a brand new single and video “Moth to a Flame”. 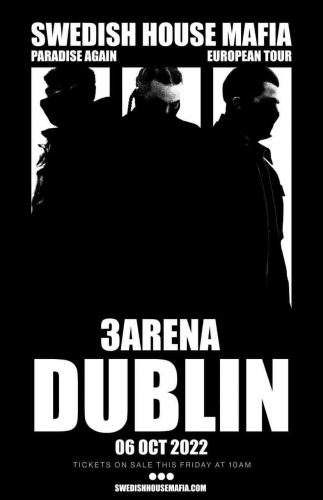 Swedish House Mafia at the 3Arena in Dublin

Their “Paradise Again” 2022 tour will be their first since 2012 when they sold over 1 million tickets for their “One Last Tour”.

The supergroup have also announced a performance at Coachella 2022 as well as arenas across America and Europe.

The reunion was first announced in July with new singles ‘It Gets Better” and “Lifetime (feat. Ty Dolla $ign & 070 Shake)”, performing them on The Tonight Show with Jimmy Fallon. These two singles plus their latest release with The Weeknd will all feature on the band’s upcoming album set for release in early 2022. Fans can pre order a special tour edition CD here that also unlocks exclusive pre-sale tour tickets.