The Late Late Toy Show theme has been revealed

The theme for this year’s Late Late Toy Show has been announced.

The highly anticipated annual edition of The Late Late Show airs this evening and will follow the theme of Disney classic, The Lion King. The theme of the Lion King is fitting considering the circumstances we still find ourselves in this year as it portrays the importance of family, growing stronger through adversity and the circle of life. 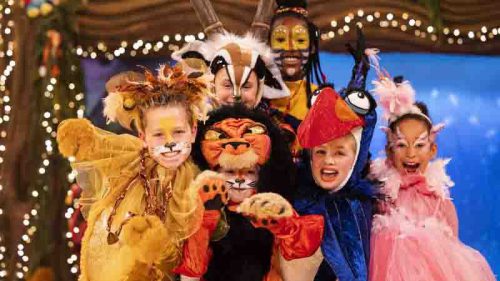 There is no shortage of great songs to choose to entertain audiences tuning in from all over the world, from Hakuna Matata, The Lion Sleeps Tonight and Circle of Life.

This will be the second Toy Show broadcast during the pandemic, however this year will have a studio audience. Last year’s theme was the Wonderful World of Roald Dahl and introduced us to fantastic children like Michael Moloney who was surprised by Dermot Kennedy, Saoirse Ruane who inspired the Toy Show Appeal that raised millions of euro for childrens hospitals and charities and of course Cork’s Adam King who melted the hearts of the nation with his Hug For You.

We don’t know yet what character Ryan Tubridy will be dressed as for the start of the show but in previous years when Disney films were the theme we’ve seen the host dressed as Olaf from Frozen, Baloo from The Jungle Book and Sebastian from The Little Mermaid.

You can watch tonight’s Late Late Toy Show on RTE One at 9:35pm or on the RTE Player. Anyone living abroad can also tune in via the RTE Player and RTE have outlines the times for different cities around the world to tune in. 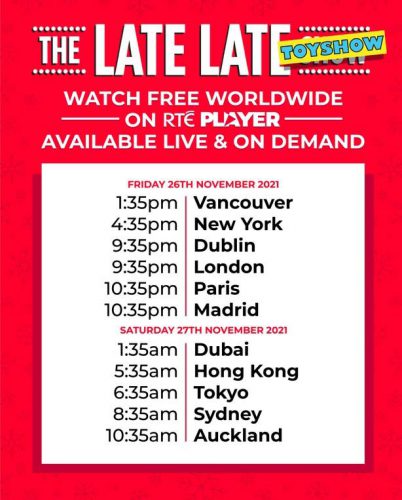 After the success of last year’s Toy Show Appeal, they have decided to run the fundraiser once again this year. Last year viewers raised an incredible €6.6 million that was sued to help children all over the country. Once again viewers have the chance to help these charities via rte.ie/toyshowappeal and Revolut will also be adding a donate tab to their app for the appeal.

Speaking ahead of the big show tonight, host Ryan Tubridy said, “Everyone has been locked up for a long time and that’s why we need to head out into the wild and join our friends in The Lion King.

“This isn’t just a theme; it is a movement. Every child can leave the house and leave the room and leave the kitchen and roam free in the jungle of their families because they are the boss tonight.

“So, it is the future, it is wild, and it is beautiful. Join us in the jungle, we will see you tonight.”

On RTE’s children’s news programme news2day, Tubridy added, “This day is very magical. Some people stop believing in magic at a certain age, I just refuse to stop because something very special happens on a day like today in this strange dream factory.

“There are children everywhere and they have eyes like saucers and they are ready and waiting, they are beside themselves with anticipation and it is contagious.”

He added that he is excited to see a studio audience in to enjoy the show saying, “It’s not a big live audience but it is enough. When you do a job like this you depend on people smiling clapping and laughing. I didn’t have that last year, but thankfully the children were so good last year it didn’t really matter.”

Ireland’s newest millionaires are based in Dunmanway and Clonakilty