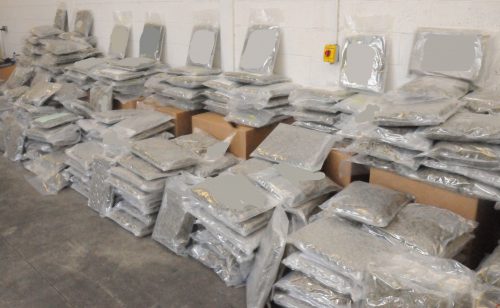 Two men in their 30’s and 40’s are continuing to be questioned by Gardai following a multi million euro drugs seizure in Kilkenny.

The €7m cannabis seizure was made at a premises in Ballyhale yesterday afternoon.

The haul was discovered after officers from the Garda National Drugs and Organised Crime Bureau searched a business premises with the help of Revenue officials.

A statement from Gardai read:

On Monday the 11th of July 2022, Gardaí attached to the Garda National Drugs & Organised Crime Bureau, assisted by Revenue Commissioners Customs Service and officers from the Eastern Region, searched a business premises at Ballyhale, Co Kilkenny and recovered cannabis with an estimated street value in excess of €6.9 million.

Two males (aged 40s and 30s), were arrested on suspicion of drug trafficking and are currently detained under Section 2 of the Criminal Justice (Drug Trafficking) Act, 1996, at Kilkenny Garda Station.