Volvo Cork Week is back! 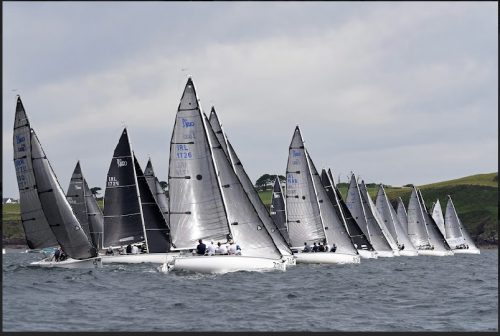 After four years of waiting, Volvo Cork Week is back. In total 193 teams (1800 people) are competing at the event, which is organised by the Royal Cork Yacht Club, and the weather truly delivered a magical start with fantastic sunny, warm air conditions with a southerly breeze of about 8 knots. For the eight classes competing, four courses were used in Cork Harbour and the Atlantic Approaches.

The event attractions 10,000 visitors to Cork and is worth €6.5 million to the local economy.

Classic Racing is back at Cork Week and Crosshaven’s Harold Cudmore was on the helm of the Cork Harbour One Design Jap for a victory on the first day. In Non-Spinnaker IRC One Frank Caul’s Grand Soleil 37 Prince of tides was the winner. In Non-Spinnaker IRC Two Shane Statham Westerly Slack Alice from Waterford Harbour won the day.

1720 Class
Despite the balmy air temperature, the 1720 Class’ return to Volvo Cork Week was marked by dense fog on the windward leeward course about a mile outside Cork Harbour. The mist soon cleared, revealing 44 1720s going at it, guns and blazes. There were three highly contested windward leeward races between Roches Point and Ringabella Bay. An outstanding performance from Rope Dock Atara gives the team from Royal Cork and Howth  a whopping 11 point lead after three races. Padraig Byrne & Donny Wilson’s Zing from the Royal Cork is second and Tom, Neil & Paul Hegarty’s efolioaccounts from Baltimore won the first race but finished in third

“We are delighted with a 2-1-1 today, “commented Rope Dock Atara’s helm Ross McDonald. “Our aim was to keep the race results in in single digits, as I believe this will be a high scoring regatta, so to get off to a flyer is fantastic. We got one good start, one okay, and also one that we had to get out of jail. In this fleet, especially in light air, it is all about getting the fresh air and the wheels on.”

IRC One
Louise Makin & Chris Jones’ J/111 Journeymaker 11 from the Royal Southern YC won today’s race in IRC One by just under a minute from Team Knight Build racing J/112 Happy Daize from the RORC. Jonathan Anderson’s J/122 El Gran Senor from the Clyde Cruising Club made it a full J Boats podium finishing third. This is Journeymaker’s first ever Cork Week, and the 2021 J/111 UK National Champion, loved racing on the Harbour Course today.

“I would say it was a very good first day in unfamiliar waters,” commented Journeymaker’s navigator, Louise Makin. “We made some really good decisions; the crew work was excellent and the atmosphere on the boat was terrific. The harbour is a fabulous place to race, and we have been blessed with great weather. We have a top Irish sailor on board; Laura Dillon and we worked really well together today.”

“We haven’t sailed Cork Week since we did it on Farr 52 Bob 12 years ago,” commented BLT’s helm Sam Laidlaw. “We have come back because it’s such a great place and with 300 years of history, everybody should be here. Today was a bit light for us, we would prefer more wind, but we will see.”

Cape 31 Class
Brand new to Volvo Cork Week is the Cape 31 Class racing for their Irish Nationals. Designed by Wicklow’s Mark Mills the pocket-rocket class started their life in Table Bay Cape Town, South Africa, expanded to The Solent UK and now onto Ireland; reverse migration so to speak! Four of the Cape 31s are from Ireland and two are Cape Crusaders from the UK. The Cape 31s were on the picturesque Harbour Course today for a single race of over three hours. Dave Dwyer’s Howth Yacht Club team racing Valkyrie took first blood, winning the race by under two minutes from the Wright brothers from Howth YC racing Adrenaline. Anthony O’Leary’s Antix from the Royal Cork was third. Tomorrow the Cape 31 will be on their Irish Championship windward leeward course.

The Beaufort Cup fleet set off from Haulbowline Island in Cork Harbour for the 120nm Fastnet Race. Nine hours after the race start the fleet was off Baltimore, 15 miles from the Fastnet Lighthouse. The Royal Navy team racing Jolly Jack Tar was a mile ahead of the Defence Forces Ireland team racing Meridian. The Crosshaven RNLI team racing Nieulargo was third.

Last but by no means least, the Royal Cork Yacht Club was absolutely buzzing after racing. Plenty of banter with old friends meeting up for the first time in years, and plenty of newbies making new friends. Volvo Cork Week is looking like being an absolute cracker.

Healy only focussed on City as title race heats up