Waterford condemn ‘ignorant and insensitive remarks’ made to Louis Britton 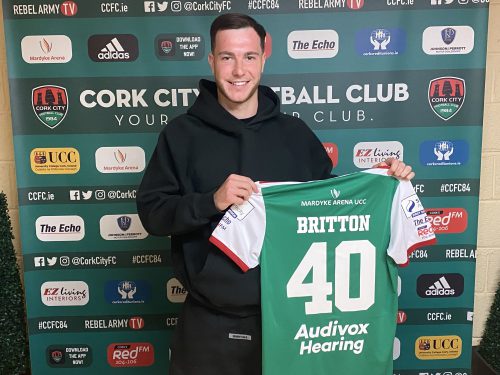 Britton took to social media to highlight threatening and abusive messages sent to him on Instagram after the scoreless draw at Turner’s Cross, one threatening to Britton with having his “head smacked in” the next time he was in Waterford, and another saying “I hope your mother kills herself and you slit her throat you dirty bastard”.

The 21 year old English forward signed for City in July, having spent the previous five months on loan with the Blues from Bristol City, scoring 10 goals in 18 league appearances in that time.

“Everyone involved with Waterford FC wants to clearly state that we are totally disgusted by the recent online remarks made to our former player Louis Britton.

“We condemn online abuse in all its forms. These ignorant and insensitive remarks were unfortunately written by idiots who have no understanding of our great game.

“There should be no place in any sport for these so called “keyboard warriors ” whose vile comments only underpin their small minds.

“Football by its nature is a very transient employment and players leave Clubs on a regular basis for various reasons, and while fans may not like to see their favourites leave, they can understand the reasons.

“Louis was a valuable member of our squad during his short time here and both he and his family were warmly embraced by the true fans of Waterford FC as are all of our current multicultural playing staff.

“An allegation was also made that some of the comments sent to Louis came from a current Waterford FC Academy player.

“Our young Academy teams are a credit to their families and represent our Club with pride.

“We wish the very best regards to Louis in his future career and trust that he will not allow the ramblings of some idiots cloud his opinion of our Club and Waterford in general.”