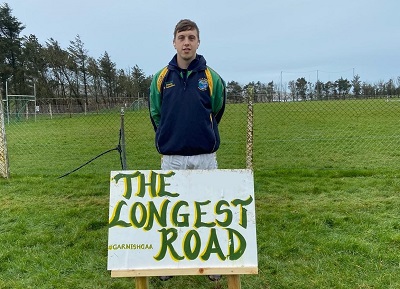 Garnish GAA Club in West Cork are planning to hold a 24 hour event in aid of the Irish Community Air Ambulance.

The GAA Club is located at the western tip of the Beara Peninsula in the parish of Allihies, and is the furthest GAA Club from Croke Park.

‘The Longest Road’ takes place on Saturday, February 26th and will see club members and supporters running and walking around the pitch for a full 24 hours.

The Irish Community Air Ambulance’s services were used by the club last summer after a visiting player sustained injuries during a practice match and had to be airlifted to Cork University Hospital.

The Irish Community Air Ambulance is Ireland’s only charity-funded Helicopter Emergency Medical Service (HEMS) Air Ambulance. It works in partnership with the National Ambulance Service and responds to serious incidents and medical emergencies from its base in Rathcoole in Co Cork.

Speaking about the fundraiser Rory O’Driscoll, PRO of Garnish GAA Club and one of the organisers of the event, said:

“We’re a small club with approximately 40 players and came really close to folding two years ago. However, thanks to huge local effort we’ve found our feet again. The importance of the Irish Community Air Ambulance really hit home when it was tasked to our club last summer to help an injured player. We’re more than two hours from Cork University Hospital and it is a long road if you’ve suffered a head injury, a bad break or a heart attack. There is great community spirit in the area and we’re delighted to be able to give back to the Air Ambulance. We plan to have players on the pitch from the very early hours of Saturday morning until last thing that night, it also promises to be a great social event with plenty of tea, coffee and biscuits throughout.”

“We’re not government funded so we rely on donations and fundraisers like this to bring hope to people in emergency situations. We were called to 512 incidents during 2021, many in rural and isolated locations like West Cork. In fact, more than one-third of all our taskings were to Co. Cork last year. Each mission costs approximately €3,500 which is a significant amount of money to raise. We’re delighted that Garnish GAA Club has chosen us to be part of their fundraiser this year.”

Rescue teams search for survivors in Turkey and Syria